8 Fantastic and different ideas for a child's graduation photos 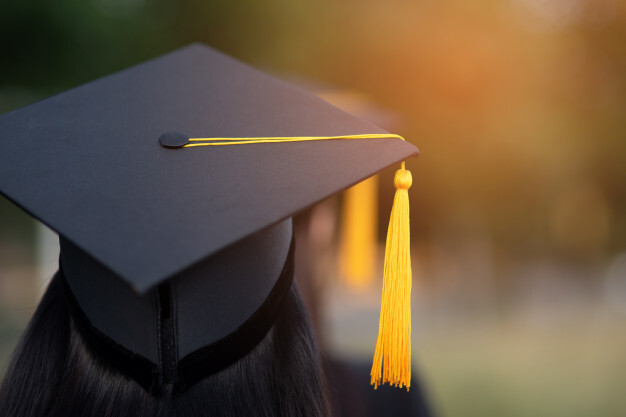 If you’re a parent reading this and your child has completed their education, kudos to you. Congratulations to your kid, but to you as well! It’s good to feel like you’ve achieved something yourself through your child’s upcoming graduation ceremony. You’ve been part of that journey, after all. And you seldom have these occasions — unlike the yearly birthday parties or Christmas gatherings. So by all means, celebrate it well. And don’t forget to take some great graduation photos.

Speaking of photos, have you put thought into what kinds of photos you definitely want in your photo book or digital photo album? Here are eight ideas for grad pictures that will certainly make up a wonderful collection.

1. Graduation photos during the ceremony 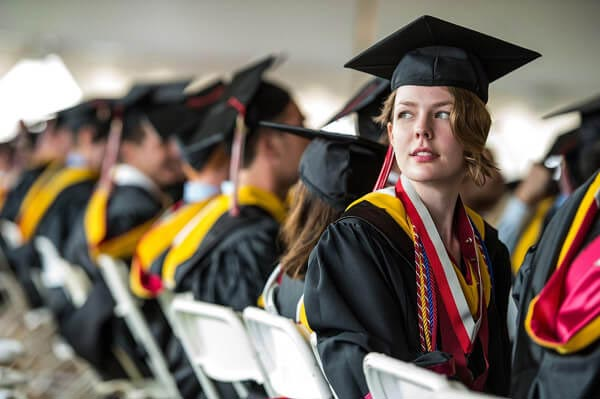 If you are permitted to, leave your seat at some point during the ceremony to quickly photograph your child seated. It will be a really nice addition to the pictures on that big day. Capture your child dressed in their graduation gown, sitting alongside their classmates.he resulting photo can convey several different emotions: excitement, anticipation, relief that all their hard work has brought them to this moment, and of course, pride. It will be a special photo whatever they’re feeling. If you’re required to stay seated as the ceremony runs, you might have a chance to do this right before it starts. Just find the right timing and if your child doesn’t notice you, that’s better, as it’s a great candid shot.

2. Graduation photos with you, the parents 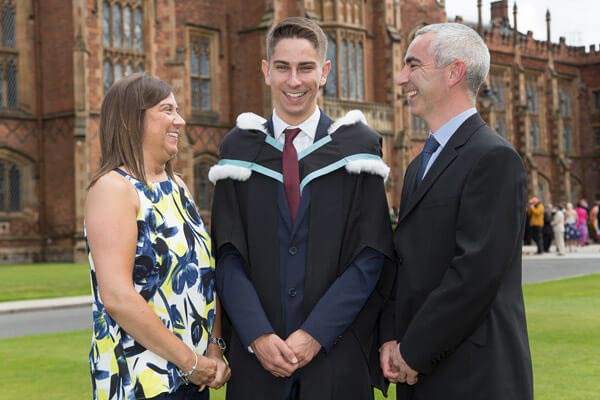 This is an absolute must, even if you or your child’s co-parent is not one for being photographed. Why? To put it simply, a child’s graduation is not just about them, but also about the people who guided and supported them throughout the years. You, the parents, are first in this list of credits. Therefore, don’t be reluctant to have a couple of pictures taken next to your child during the big day, including photos with them holding their certificate, and also photos in prominent spots around the campus.

3. With professors and teachers 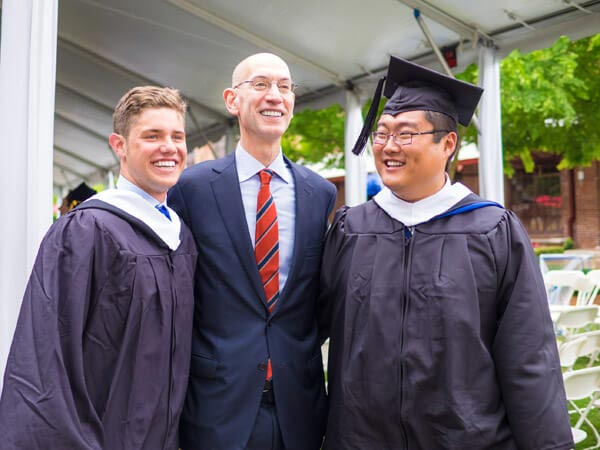 Most kids would say they have a professor or two who they’re grateful to have met: teachers who have imparted real knowledge and wisdom, who have inspired them to learn more about things and strive for better. Those are the people your child would surely want a photo with. Hopefully, they will be available before the ceremony or shortly after it ends.

4. Toss up the academic cap 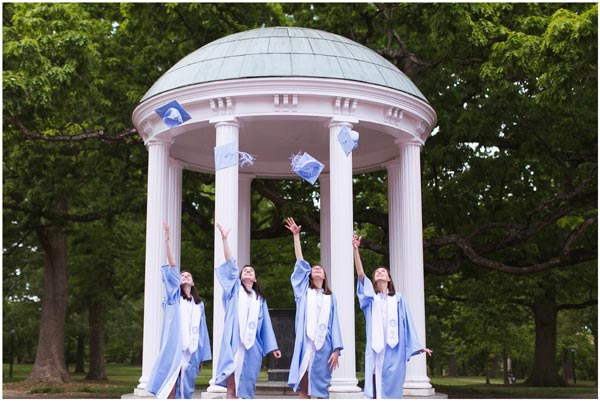 While this may be among the more cliched types of grad photos, it’s still a highlight picture for the album. With the cap thrown high up in the air, there is that genuine, feel-good emotion that comes across in the picture. It serves as a continuation of the story that’s been covered by the other photos of your child during the ceremony. It’s like an alternative to taking a bow onstage, but with the same kind of message: “I did it! I’m officially closing this chapter and entering a new one.”

5. Posing beside the mascot or statue 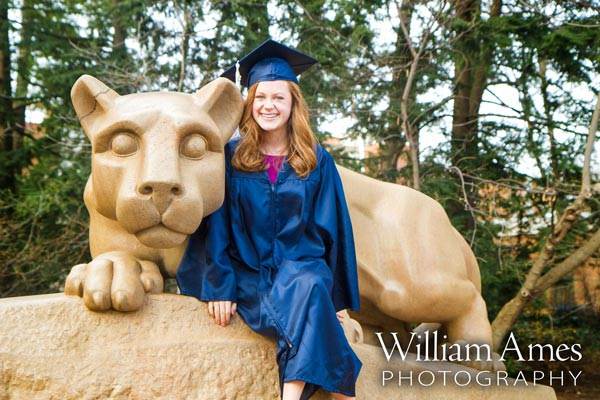 Your child probably has some fond memories tied to that first day or week in the university, and chances are they took a picture of themselves next to the school mascot or a statue on campus. Therefore, it is only fitting that on their final day as a student, you let them pose with it once more. Not only is this great for the graduation album, but it will work nicely as a ‘before and after’ feature alongside that first photo from back in the day. 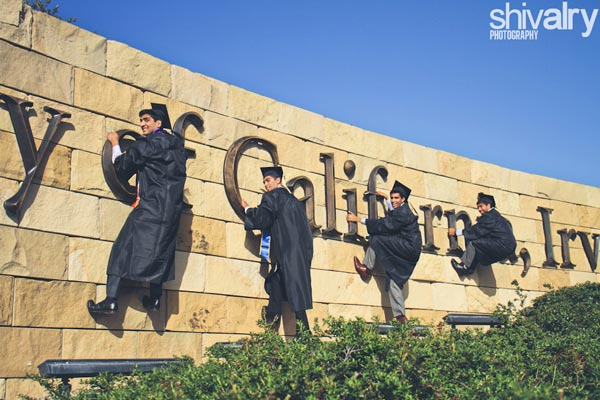 Do graduation photos need to look formal all the time? Definitely not. So here is one idea which your child and their classmates can try having a little bit of fun with. If the university has a gigantic sign with large, block letters, there is the opportunity for them to each cling onto a letter or pose creatively in between the letters. Honestly, there’s probably no other occasion that is as appropriate for doing this.

7. Posing with the books 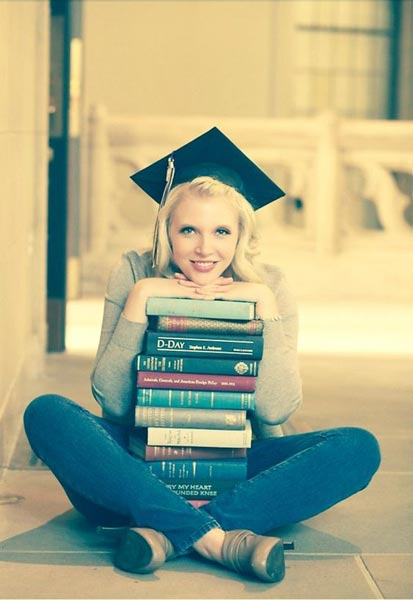 Now for a less conventional idea for your kid’s graduation photos. On the big day, consider bringing along some of your child’s books from their days at the university and keep them in the car. Then later on, depending on how much time you have and when it’s convenient to grab them, you can photograph your child holding their books. Perhaps a large stack would make for a dramatic, I-went-through-a-lot kind of effect, but three or four books will do just fine. They are basically a different form of accessory, as are the certificate and academic cap.

8. ‘Candid’ graduation photos of your child looking away 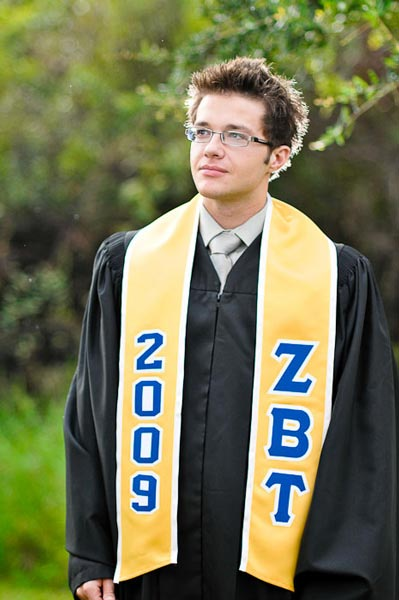 Finally, see if you can get your child to stand straight without looking at the camera, as though it was a candid close-up shot. They don’t have to smile. They don’t have to do anything with their hands. Just take a picture of them looking far out, as if they’re contemplating life after their time at university and wondering what lies ahead. It is, after all, a moment to realise how everything’s going to change. Nothing is surely planned out for the years ahead at this point. Nevertheless, it’s a moment for your child to think about the years that passed, and feel truly accomplished. And hopefully, that comes across in this photo.

Graduations, like other key life events, deserve to be looked back on with some memorable pictures. We all have photos that are important to us, as they have sentimental value and allow us to revisit those cherished moments with the ones we love. But how about those pictures that are printed out and don’t have a digital version? What if they end up fading and wearing out in the album before you realize what’s happening?

While you still can, digitise all your physical photos and store them in a secure space online, which can be easily done with Memories. Use Memories to preserve pictures from old photo albums and reorganise them into timelines. Memories is accessible both on web browsers and through the app, which is available on Android and Apple devices. Sign up for a Memories account today and start digitising your most valuable pictures.